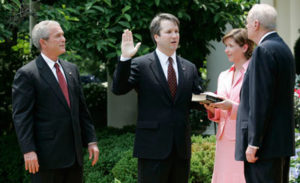 “They’re not accurate as to me,” Kavanaugh said. “I have not questioned that she might have been sexually assaulted at some point in her life by someone, someplace. But as to me, I’ve never done this. Never.”

Shortly after Ford’s testimony, two more women came forward to charge Kavanaugh with sexual misconduct. The additional allegations prompted Democratic leaders in the Senate to request the FBI to perform a formal investigation into the charges. A few days later, the FBI submitted a report that each senator had 30 minutes to read. At the heart of the report was the conclusion that there was not enough evidence to support Ford’s allegations of sexual assault. Many Democratic senators erupted with contempt for the FBI and the perceived flawed investigation. New Jersey Democratic Senator Cory Booker said during a campaign rally in Des Moines, Iowa on Sunday October 4 that impeaching Kavanaugh “is not off the table.” Only one time in American history has the senate impeached a Supreme Court judge.

The rancor caused by Kavanaugh confirmation hearings triggered uncharacteristically vehement reactions from typically diplomatic senators. Booker’s assertion that impeachment “is not off the table.” was made during a fiery speech in which the usually calm senator claimed the hearings were fraudulent and the FBI is concealing evidence. As a Republican who has frequently crossed the aisle to work with Democratic senators, Lindsey Graham told reporters right after the testimonies of Ford and Kavanaugh that the hearings have turned into a “sham.” The bitter acrimony is reminiscent of the mood of the senate right after the Thomas confirmation hearings in 1991. Many political pundits believe the Republican victories during the 1994 midterm elections stemmed from the backlash caused by the way Democrats handled the Thomas nomination process. It remains to be seen how the 2018 midterm election will turn out, with the Kavanaugh hearings looming at polling booths throughout the country. 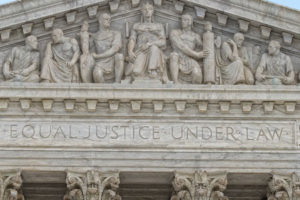 WHAT TO EXPECT FROM JUSTICE KAVANAUGH

On Saturday, September 29, the Senate confirmed Brett Kavanaugh to fill the vacant seat on the United States Supreme Court. Lost amid the media frenzy over sexual misconduct charges is how Justice Kavanaugh will rule on the hot button legal issues.

During the initial series of testimony sessions before the Senate Judiciary Committee, Kavanaugh emphasized he perceives Roe v. Wade as “an important precedent of the Supreme Court” that the United States legal system has “reaffirmed many times.” He said reversing Roe v. Wade would “violate judicial norms.”

On several occasions, Kavanaugh reiterated his strong belief in the Founding Fathers commitment to Religious Liberty. “It’s important to recognize that the First Amendment to the Constitution, as well as many statutes, of course, protect religious liberty in the United States … and as I’ve said in some of my opinions, we are all equally American no matter what religion we are or no religion at all — and that means religious speakers and religious people have a right to their place in the public square.”

LEGAL AUTHORITY OF THE EXECUTIVE BRANCH

The increasing use of an Executive Order to influence public policy has come under intense scrutiny ever since the presidency of George W. Bush. Although Kavanaugh did not directly refer to Executive Order proclamations, he did discuss his judicial philosophy on the legal protections a President should use when confronted with a subpoena and a formal investigation. In a 2009 Minnesota Law Review piece, Kavanaugh wrote “Congress might consider a law exempting a President-while in office-from criminal prosecution and investigation, including from questioning by criminal prosecutors or defense counsel.” In the same article, however, he noted, “If the President does something dastardly, the impeachment process is available.”

THE RIGHT TO BEAR ARMS

The Second Amendment always plays a prominent role in the nomination hearing for the United States Supreme Court. Senate researchers provided evidence of Kavanaugh’s position on the Second Amendment from a ruling that took place in 2011. Kavanaugh dissented from the majority opinion that upheld the constitutionality of a handgun ban in the District of Columbia. Referring to a previous ruling by the Supreme Court, Kavanaugh wrote “It follows from Heller‘s protection of semiautomatic handguns that semiautomatic rifles are also constitutionally protected and that DC’s ban on them is unconstitutional.”

With Supreme Court seats being lifetime appointments, Kavanaugh’s stay should be a long one. Only time will tell whether Justice Kavanaugh will be able to put all of this aside and rule on the legal issues.  One thing is certain, his decisions will always be be heavily scrutinized by many, whether that is justified or not.

Tryk Law, PC is a Fresno Personal Injury Law Firm that handles matters for those who have been injured through no fault of their own.  This article is written to be informative in nature and not intended to express our political or legal opinions on the subject matter or content of this article.  If you need assistance after suffering an injury, call us today for a free consultation at (559) 840-3240.