SERIOUSLY STILL THE LAW IN AMERICA?

Once upon a time in America, there was a quirky television show called That’s Incredible. The show examined some of the more bizarre elements of American culture.  The show should have delved into the oddest laws still on the books in the United States.  Here, we explore the question: Are these seriously still the law???

Cyberspace abounds with lists that describe the strangest laws in America. Are the laws real or just a funny joke played by a hip online prankster? The answer is somewhere in between. Although there is not a law in Maryland that forbids you from taking a lion to the movies, there is a law in Texas that you are prohibited from selling one or both of your eyes.

Who doesn’t want to take a nice warm fluffy lion to the movies or sell an eye if times get tough? According to our crack research at Tryk Law, PC in Fresno, the following is an odd list of laws still on books.

Every state has numerous laws on the books that are considered strange. Why the laws still exist is a matter of intense conjecture. Perhaps the statutes have become lost on dusty bookshelves found in antiquated state capital storerooms or maybe there are a few historians around that enjoy funny jokes told at the expense of the oddest laws still on the books in America.

Let’s look at a few of these strange laws that if you are found breaking, you may have the book thrown at you!

Impersonating a Member of the Clergy (Roll Tide)

Once a year, the State of Alabama splits down the middle in favor of either the Auburn Tigers or Alabama Crimsons Tide. The annual Iron Bowl stokes the flames of school pride, but students and alumni from both schools agree on one thing: The law that prohibits the impersonation of a member of the clergy is downright absurd.  If you are caught dressed like the Pope, you face a fine up to $500, as well as one less idea of what to dress like for Halloween.  Wait, not even for Halloween???

Section 18-55 of the Little Rock, Arkansas Code of Ordinances states “No person shall sound the horn on a vehicle at any place where cold drinks or sandwiches are served after 9pm.” Customers of pizza parlors and convenience stores rejoice.

In California, you can hold as many frog lumping contests as you want, in any town where there are enough crazy people to make it worth your while. However, after the contest is over, you are not allowed to eat any of the participants. If you want to devour a plate of frog’s legs after a frog jumping contest, you have to move to Alaska and deal with that state’s long list of zany laws.

Have you ever wondered if criminals really ponder the significance of all the “Beware of Dog” signs? Well, in Florida, lawmakers believe the signs represent a legal function. If a criminal enters your property and receives a bite from Fido, you are liable for personal injury damages if you did not hang a “Bad Dog” sign at the entrance to your humble abode.

Fish with a Rod and Reel 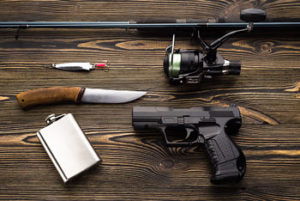 It is apparent The Hoosier State has full control over criminal activity. How else can you explain the legal impetus behind an Indiana law that prohibits the catching of fish by using your hands or operating a firearm? Some fish require outside the box thinking to catch.  Indiana enacted this Fishing Rod Control statute and it leaves us all scratching our heads and asking: Is this seriously still the law in America?  So, no using your Glock or your hands when trying to catch a fish in the Hoosier State.

Being Nice comes with a Price

You cannot steal crawfish during your stay in Louisiana. That makes sense, since crawfish generates millions of dollars in tax revenue. Your pockets might 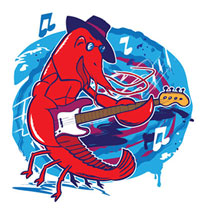 be empty of crawfish, but if you send a surprise pizza to a friend in The Bayou State, you can be liable for breaking a state law that forbids the sending of unexpected goods and services.

Drinking and Riding on a Train

While most states grapple with the potentially devastating consequences of drinking and driving, Michigan has allocated resources to stopping an especially nefarious crime: Drinking and riding on a train.

In Michigan, you are not allowed to become even slightly comfortably numb until you cross state lines on a train.  Okay, this one wasn’t that weird.

It is not just Fargo, but in the entire state of North Dakota, you need a permit to kill pigeons. Even an errant shot in an attempt to nail another species of fowl can get you a hefty fine for killing a pigeon, without carrying a permit.

Many of us like to push the pedal to the metal when we test drive a new vehicle. In Rhode Island, that is an acceptable. Just makes sure that if you test drive a horse, you do not brag about the speed of the horse to other residents of the state. Horse Speed Testing is not permitted in Rhode Island. Don’t get out your radar gun!

Virginia residents must really despise raccoons. How else do you explain the Commonwealth’s nuisance species laws? Virginians are not allowed to kill any nuisance species on Sundays before 1 pm or after sunset. That is except raccoons, which must hide out until 2 am on Sunday mornings before coming out to chew up utility lines and knock over trash dumpsters.

Bake Sales Treated Like Meth Labs in the Badger State

You know those bake sales that raise money for youth groups and other highly reputable organizations? In Wisconsin, bake sale organizers used to be treated like Walter White from Breaking Bad. Any violator would once face up to six months in jail for selling home-baked cookies in Wisconsin.  This law was struck down in 2017 and bake sales are now allowed in Wisconsin.

California Law May Benefit You If Injured

If you are uncertain about whether some California Laws may apply to you after suffering an injury, Call Tryk Law PC today to speak with one of our Fresno Personal Injury Lawyers.  Tryk Law PC is a Top Rated Fresno Personal Injury Law Firm specializing exclusively in helping those injured as a result of the bad acts of others.  We can be reached at (844) FRESNO1 or locally at (559) 840-3240.  You can also fill out our Online Form for a call back within 24 Hours.